A team of Maltese Poodles could beat the South African cricket team.

I have a larny chrome kettle. It’s shiny. It’s spiffy. It goes well with the other brushed steel appliances and containers in part of my kitchen.

Now, I’d like to say it was due to a design flaw, but that would probably be unfair to Mellaware. They do have a mark inside the kettle that indicates maximum water level. This guideline may have been ignored on several occasions by those in the family who embrace entropy, and all it’s associated chaotic effects, wholeheartedly. 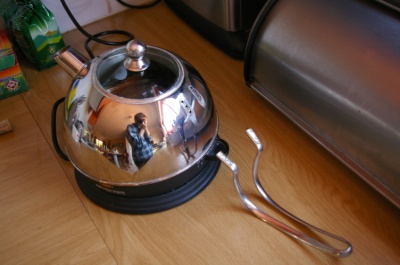 I suppose I should try to fix it. I’m uncertain though: does it need welding or soldering? And what effect will the heat have on the nice shiny bits. Will they be permanently tarnished? Will the kettle get all bent out of shape (literally).
At any rate, I don’t have the required equipment, nor the desire to own it. Suggestions on a permanent fix to this problem are welcome, but in no way urgent. I’m using the kettle as a kind of performance art piece now.

Metal kettles full of recently boiled water get hot. One cannot pick them up to fill the teapot without insulation. Perhaps I’ll get Angie to help me take an action shot of the Dadaesque performance art kettle in use.

Just in case you’ve given up on her, don’t. The Angie Purple has a new post.

It’s been almost half a year, but I hear promises of more regular updates. We shall see.

Point is: I searched google for “best tourist destination eastern europe” and noticed that the 4th hit was this dubious gem.

Maybe I need to reassess whether or not the advantages of Eastern Europe outweigh the disadvantages.

Easter weekend. Angie and I booked two nights (Saturday and Sunday) at Goblin’s Cove. We’ve been there before. It was weird then. It’s still weird. But we like weird.
(I also note that imageshack has eaten the photos on the page that links to. Stupid imageshack).

Then she closed in on the table near us, where bees were happily investigating the sticky tablecloth. They weren’t bothering us. Psycho-woman was, especially as she waved the can and lighter about.
Angie asked her to please leave the bees alone. She replied that she wouldn’t possibly think of setting them alight near us. She went away, and at least those bees were spared — for the meantime.
As we sat at the table in the open-air coffee shop, situated in a pleasant, tranquil forest, we were unsettled by the just noticeable, slightly sweet, slightly charcoal smell of heavily crisped bees. That smell, and the occasional sound of localised pressure changes in the distance as the oxygen was sucked from the air to help form a bee-apocalyptic fireball.

Everything else was pleasant though.

One of the waiters at the main restaurant (not the coffee-shop) took quite a liking to us. We rather liked him too. There was an instantaneous rapport between us. After lunch (which ended relatively late) he suggested we come visit. After all, he lived on the property, just next door to the restaurant.
So a little later we wandered over and visited our new friend Wikus. He was staying in a house that was designed and built by the same guy who’d put the insane architecture together for the Goblin’s Cove restaurant. We had a look around. Up the spiral stairway. On the creaky, uneven wooden floorboards. Holding onto ropes, because there were no railings where there should’ve been. Incredible place to live.
Wikus told us he was a little paranoid about living there because it had massive windows and no burglar bars, and a not entirely secure front-door. Wikus is originally from Joburg. That should explain it all.
We spent quite a while sitting there, drinking with him, chatting, smoking. Talking politics, talking religion, talking history, talking relationships, talking shit. The restaurant’s cook came over for a little too. Jaco was his name, I think. Wikus and Jaco are both of the age where the big bad old apartheid government conscripted them. Wikus did his national service and then 6 months later, they scrapped it. He never went any place too intense. Nothing too crazy happened. He thinks Afrikaaner nationalism is a little ridiculous, and they kicked him out of F.W. de Klerk’s office (where he was going to be a staff clerk) because he’d been bust possessing marijuana.
Jaco went to Angola. Jaco fought in a war, for something he thought was justified. Jaco seemed like a really pleasant guy (he joined us for about 20 minutes or so, before going to bed). I quite liked him, and I really liked his cooking, but one could see a level of distress underlying the surface. Demons lurking there.
It made me think about who was helping these people. On both sides of the struggle. People who fought in wars and did things they’d never dream of doing today. Who is helping these souls? Or are they just left in torment for the rest of their lives, forgotten by society. The dirty laundry that no-one wants to face up to, let alone clean.

Getting intense. Unintentional. Still, it was an excellent weekend and we met interesting people and experienced interesting things. We exchanged contact details with Wikus. I really hope we don’t let inertia stop us connecting again.

This week, it’s proving to be a weakness.

While driving home via the N1 highway on Tuesday afternoon, the engine stopped working. I don’t really have the full details since Angie was driving. She really should be the one sharing this story, but we all know that is unlikely to happen. I’ll do my best.

The car cut out in the middle lane, and Angie came to a stop. Soon afterwards, I received a frantic phone-call from her, pleading with me to please help her. The car has stopped dead! People are hooting! I can’t get out of the car! Help me!
I wasn’t really sure what I was meant to do, considering that a) I was far from the scene, b) I had no way of easily reaching the scene, c) Even if I could get there quickly, I still wouldn’t be able to do anything.
I should’ve told her to phone the insurance people, but I faltered. Under pressure, I couldn’t really think of what to tell her to do. In the end I told her to phone 112 — the cellphone emergency number.
The problem was further exacerbated by the fact that I couldn’t keep Angie on the phone and try to calm her down because her cellphone battery was almost kaput. This left us with SMS communication. Clumsy and difficult. And confusing at times.

On the bright side, Angie had 15 seconds of fame as she made the 5FM traffic news (and probably other radio stations’ news too) for causing an obstruction on the N1, and slowing traffic.

Ultimately, a tow-truck arrived to transport Angie and the car home. The confusion of the SMSs played a part here. From our texted communication, I thought that the tow-truck had picked up the car and left Angie on the side of the road. Panicked, I phoned Quinn to ask him to give me a lift to fetch Angie (who I believed, was flapping at the side of the road — using words like “desperate” can give that impression).
By the time Quinn arrived, Angie texted me to say that the tow-truck had arrived and would be bringing her home soon.
Why I thought it had already made an appearance isn’t entirely clear to me now.

The truck brought the car home, to my slight dismay. Because we’d need to tow it somewhere else the next day — at additional expense. At which point Quinn brought to my attention that the insurance people should do it. At which point I felt foolish for having paid R500.00 to get it towed home.

The fun of the night was not yet complete.

By this point, it was about 18h30. Angie and I had intended to have pizza that night, and we were not intending on changing our plans. Kindly, Quinn dropped us off at the pizza place in our suburb. We ate the pizza, cursed our dismal luck with automobiles, and drank wine.
Then we walked home. At night. In Johannesburg. That’s right kids. It’s not really that scary. The pizza place is only about 1.5 kilometres from home.
Except…
As we got to the last corner before turning into our town-house complex, we encountered many agitated people on the road outside a house. And then one of the ADT security vehicles came flying by. We overheard the word “hijack.” The people looked at us as if we were strange circus beasts, or a rare species of bird — a breeding pair of the lesser-known white-skinned nocturnal pedestrian.

The truck was towed on Wednesday morning to a service station, where I was cheerfully informed that the cam-belt had snapped, bending all valves.
People with cars dread this happening. Fixing it involves replacing a bunch of stuff, and taking engines apart and so on. It apparently costs a lot because it takes a while to get everything done. I don’t really know for sure because I’m more of a geek than a mechanic. Which is why I get ripped-off by mechanics and not by PC sales-people. In hindsight, given the relative expense of purchasing and maintaining PCs versus motorcars, I should’ve taken more interest in mechanical operating systems, than in computer operating systems. At least from a financial perspective.
Further adding to my grief is the fact that the service station couldn’t source one of the spare parts before the end of today. It’s now the Easter weekend, which means I have no car until Tuesday.
We booked two nights at Goblin’s cove over the weekend.
Fortunately, Angie can abuse her position at her NGO and borrow the organisation’s car for the weekend. So, at least we are vaguely mobile once again.

These, and other unmentioned things, led me to return to get my hit of Buddhism on Wednesday. Something I’d been missing lately. One needs to attend classes regularly otherwise one forgets to keep doing those useful things that keeps one calm.

I’m keeping calm again, which is much better than the grumpiness I had been returning to.

More of my Waffle

The Waffle Group Blog by Neil Robinson is licensed under a Creative Commons Attribution-ShareAlike 3.0 Unported License.